Being a bison fan, I could not resist to buy this beautiful entrecôte. 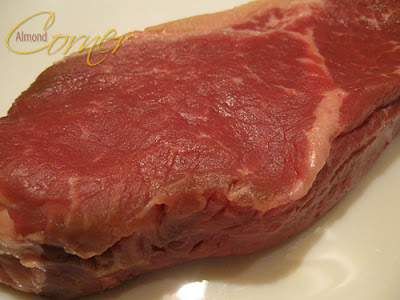 The only question was: how to prepare? Some days ago by accident I found a dose of vanilla salt in my pantry and it was clear that I am going to give the meat a vanilla touch. I fried it in butter together with a vanilla pod, sprinkeled with vanilla salt and hoped for a decent vanilla taste. Well I was a lot disappointed! No smell or taste of vanilla while eating. Anyone an idea why? 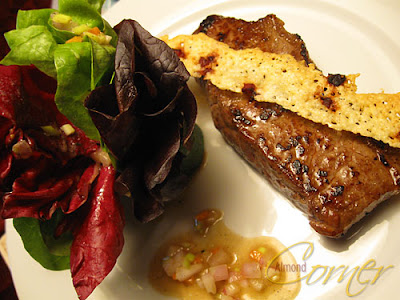 Email ThisBlogThis!Share to TwitterShare to FacebookShare to Pinterest
Labels: other

Sorry to hear the bison was, uh, vanilla (or rather, not vanilla). :( I'm thinking the heat totally vaporized the vanilla? Broke it down? Well, it looks beautifully done anyway :)

It sure looks sooo tasty, never mind that the vanilla evaporated! That makes me hungry!
I never heard of vanilla used in savoury dishes, interesting!

the boiling point of Vanillin, the aroma-responsible ingredient is at about 170°C, therefore, you evaporated all of it during the frying process. Just add the vanilla-salt over the finished meat. Liebe Grüsse.

I scrape the "marrow" off 2 dried vanilla shoots, cut the shoots in half, add the marrow and shoots, together with other spices and salt, to oil and heat it slightly for a while to get the aromas into the oil. However, then I add the shrimps which don't need much heat, and simmer them.
I lack experience with vanilla with steaks. You may try the above, although the scientific reasoning of lamiacucina speaks against it. With shrimps it's great.