Well, for some reason I am not able to get back on track, and maybe I do not even want to. I haven't cooked much these days, so it was time to go back to the kitchen. The summer seems to turned into autumn, at least it feels very much like that with the rain and even already some leaves turned to red. So it was more than welcome to turn on the oven in a cold and rainy afternoon. I had the spontanous idea to bake a soufflés that turned out so fluffy. First I wanted to make it with blueberry puree, but then I decided to leave the fruits as they are and that way the soufflés looked like blueberry muffins. 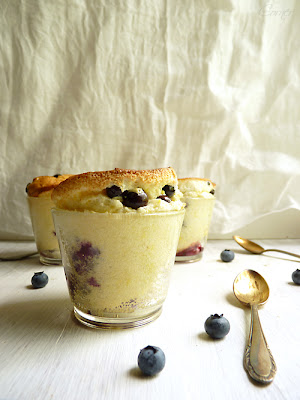 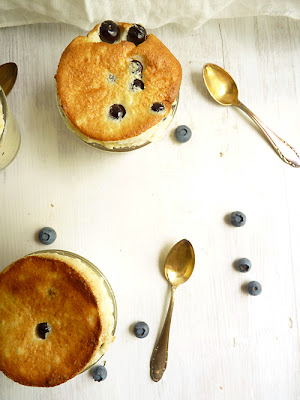 Butter 6 small or 4 large soufflé forms and sprinkle with sugar, then put it into the fridge. Marinate blueberries with lemon juice, ground cinnamon and allspice. Bring 150 ml of milk together with a vanilla pod and 20 g of sugar to the boil. Whisk egg yolks until plate with another 20 g of sugar, stir in flour and the rest of the milk. Pour hot milk to the egg yolk mixture while stirring. Put it back to the heat and as soon as it has thickened, set aside. Beat egg whites until half stiff, then add the 35 g of sugar and beat until stiff. Stir marinated bluebeeries into the egg yolk mixture, then fold in the beaten egg whites. Bake for 10-12 minutes on 200°C. 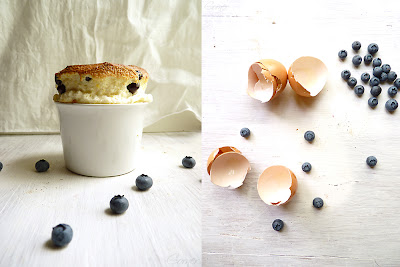 What beautifully well-risen soufflés! A delight.