One of the first dishes I had when I moved to Switzerland was sliced veal liver with rösti. Strangely, I haven't ever prepared it myself until some days ago. The recipe is simple and fast and the result is totally delicious. Unless you are not a liver fan... 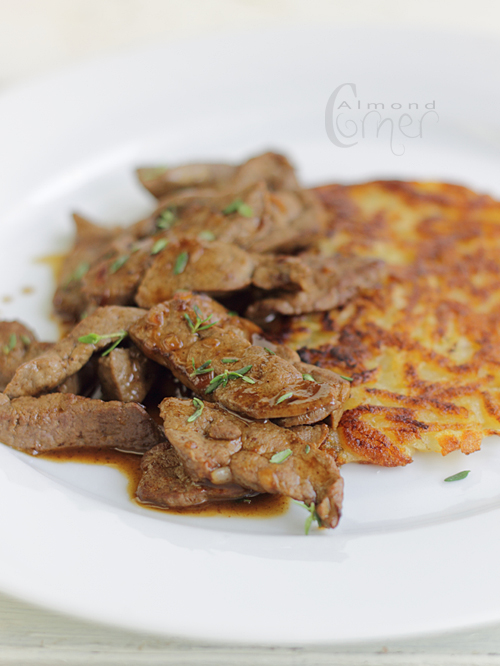 Slice the cleaned liver and chop the onion. Sauté onion in butter. Fry sliced liver together with the thyme leaves for a minute and a half on both sides. Set the liver aside. Add cognac and brown veal stock, reduce. Put the liver back to the pan cook for another minute, season and serve.
Posted by chriesi at 10:53 AM

Email ThisBlogThis!Share to TwitterShare to FacebookShare to Pinterest
Labels: meat and poultry, swiss

I do love liver and kidney and *?/&"*ç!*, other things many don't like. A coincidence again, you don't believe it, veal kidneys are lying next to my chopping block right now and potatoes are boiled and already cooled down, need to be peeled and grated, to become Roesti tonight, within the next 30 minutes :-)

Mmm sounds very good! I also love all that stuff you mentioned...or rather not mentioned. *grins* En guete dem fall! :)

Your dish looks fantastic!
I'll be honest with you, I love liver, but only if it's prepared in a restaurant.
In other words, I've never been able to touch liver, in its raw state; the uncooked texture makes me a little queasy.

However, prepared by someone else's hands, I will devour it, without blinking, and ask for seconds.

I also had this kind of problem with liver, but mainly with poultry liver, with veal or beef not. Maybe because those are less complicated to work with, at least to me, and therefore I need to touch it less.