Actually, I went to the kitchen to cook something for lunch, but I felt so empty and had no idea, so I decided to bake macarons instead. Well, I still have no idea, what to cook, but I have a nice bunch of macarons. Somehow I always postponed making Italian merinuge based macarons, and what a mistake this was! I have never managed to bake white macarons before, but today finally it just happened! It seems, that I made one step towards imporving my macaron baking skill. I am so happy with these batch of macarons, and now I feel like I could bake macarons all day long. I already have some egg whites ageing and I can not wait to bake another bunch! I have never been a big fan of macarons, but these made me love them.  When I had two sheets baked, I decided to add some cocoa powder to the batter and even those worked out! I was thrilled! So far I always had problems with cocoa powder in the batter, but not this time. For the filling I took an old and almost forgotten recipe of mine that is actually a raspberry curd, but now I've prepared it with red currants. 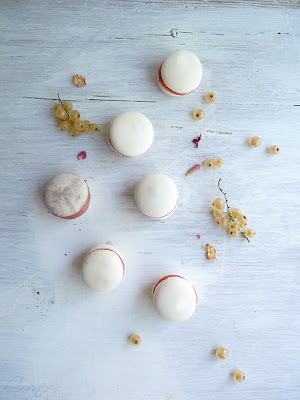 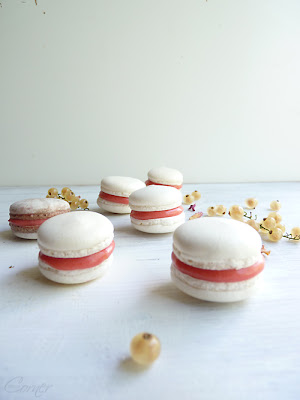 Beat 40 g of egg whites with 25 g of sugar until it forms peaks. Meanwhile make the syrup: bring 100 g sugar with 35 g water to boil and as soon as it has reached  110°C remove it from the heat and add it to the beaten egg whites in a thin stream while beating constantly. Keep on beating until it has cooled down, this takes about 10 minutes. Stir the other 40 g of egg whites, unbeaten to the sieved almond-icing sugar mixture. Preheat the oven to 150°C. Pipe macarons onto a silicon sheet or a baking paper covered baking sheet. Bake macarons for 13-15 minutes depending on the oven or a few minutes longer if you make bigger ones. For the filling whisk together red currant puree with icing sugar and the egg yolks and beat it over steam until it thickens. Remove and whisk in room temperature butter. Chill curd for 2-3 hours. 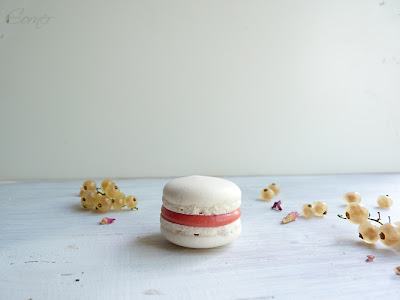 Email ThisBlogThis!Share to TwitterShare to FacebookShare to Pinterest
Labels: macaron

Fantastic! I love the acidity of redcurrants.

I reallyreally love the composition of these photos, especially the second one, they almost seem to have their own little personalities! (or maybe im just going crazy cos i want to try one so badly...) gorgeous sounding recipe, the red currant puree sounds amaazzzinnggg

Grate article, We at Addhunters shifted this service to a level much higher than the broker concept.
you can see more details like this article
For sale in pearl qatar