I wrote yesterday about the almond milk, so here it is. I made a version with chocolate, which for me, was too chocolaty. The almost pure version tastes fabulous. 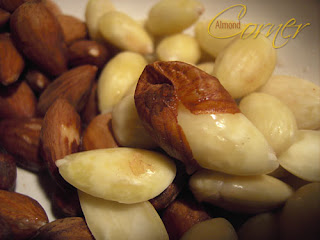 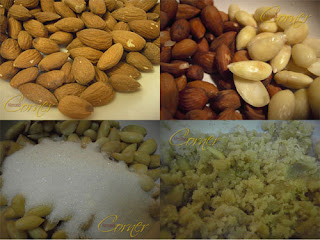 Bring some water to boil, add almond and let it soak for about 5 minutes. Peel almond and puree with 60 g of sugar. Add 300 ml water to it and leave overnight in the fridge.
Bring milk to boil, add the rest of the sugar and cinnamon stick. Remove from heat, add rose water. Sift almond water, which should be white, add to the milk and cool for 2 hours. For the chocolate version melt about 30 g of chocolate, add 1 teaspoon cocoa and mix. 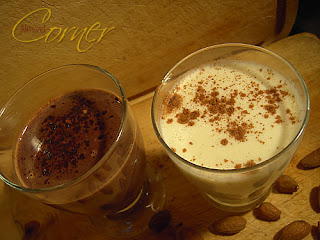 Email ThisBlogThis!Share to TwitterShare to FacebookShare to Pinterest
Labels: drinks

This is really interesting. I have never thought of making this. I love the addition of rosewater.

Can the white almond water liquid be considered milk? I saw another post that made almond milk out of just almonds and water. I wasn't aware a nut could make a milk!

According to wikipedia: Almond milk is a milky drink made from ground almonds.
It is not the same type of milk like cow milk but it is milky, even without the addition of the real milk like in my recepie.

Coimbra, April 23, 1975.
"A few days ago, during the homily of Sunday Mass in a parish church in rural surroundings, the priest spoke to his parishioners about the forthcoming elections for the Constituent Assembly. Launched hand of the parabola to be better understood and told them:

-- "My dear brothers in Christ: suppose that one of you is owner of a dairy cow; if socialism wins, the brother takes the cow, but will have to give the milk to the party, if the communism wins, we will stand without the milk and without the cow. .." "